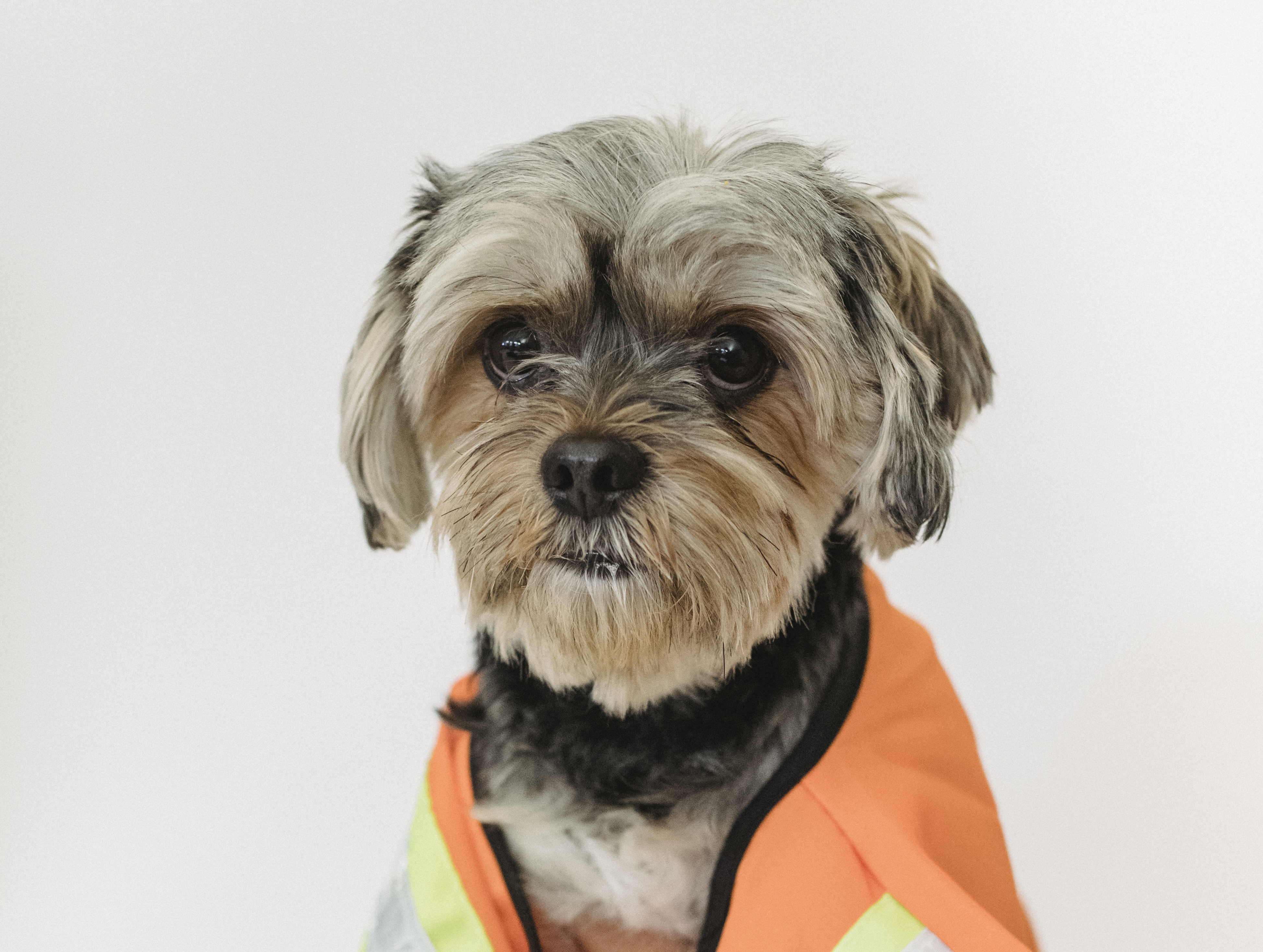 I recently read Susan Orlean’s interesting biography of Rin Tin Tin (Rin Tin Tin: The Life and the Legend). After finishing the book I clearly understood why German Shepherds make good guide dogs. They were originally bred, in Germany (of course) in 1899, to reflect those qualities valued by the breed’s founder, Max Emil Friedrich von Stephanitz. Orleans quoted from von Stephanitz’s book the german shepherd dog that he liked dogs that demonstrated “attentiveness, imperturbability, malleability, vigilance, dependability, and incorruptibility.” The final trait they showed that ensured the herder’s suitability as a guide dog was his “unique ability to bond with human beings,” particularly his individual masters. That deciding factor also gave me a clear understanding of why French bulldogs, including my Phil, would never serve well as guide dogs. At least not the traditional kind, and therein lies the lesson.

My dog ​​fact book accurately describes Frenchies as “courageous, active, and alert.” So far, as good as a guide dog’s potential, right? But then he goes on to observe, with fabulous understatement, that a French bulldog “doesn’t care much for submission.” SAY OH! When I adopted Phil when he was two and a half years old, he was a well mannered and educated show dog owned by an experienced breeder, Pat Pearce, who owned and managed him, who said he was putting him up as a pet because in the acting ring “lacked focus.” He now disagrees. He has focus as long as he is on what he wants. I often joke that I take Phil for skating, not walking, because he plants his four meaty bulldog paws, just on the principle of non-submission, and I end up having to drag him anywhere. Once, when my husband was doing the same thing, a woman approached him and threatened to report him for abusing a dog by pulling him. (She didn’t realize we used a chest harness on him, not a neck collar, to humanely accommodate her hardwired stubbornness.) My husband asked her, “Ma’am, have you ever had a bulldog?”

Now I’ve learned to work with him a little better, but nevertheless, I finally understand what the vet exclaimed on Phil’s initial visit to the clinic: “You picked a bulldog like your first dog?” Yes, and I’m heartbroken.

The fact book also says that a Frenchy “needs a lot of love.” That’s because a Frenchy gives a lot. When I was getting information about Pat’s breed, he asked me if I was looking for a guard dog. “No,” I replied, and she said, “Good, because Phil might try to lick someone to death, but that’s the most he would do to an intruder!”

Phil loves everyone, not just his master, the German Shepherd. Well, almost everyone. There’s been the occasional snub, usually right after I’ve said, “Sure, you can pet him! Phil loves people.” Embarrassing. But in the entire four years I’ve had it, that’s happened maybe a half dozen times. Because he is generally such a social person, he especially likes to walk (and randomly skate) through the center. We live in a small town in New Mexico that attracts a lot of tourists and the town’s central plaza is the place to be for tourist activities. Although Phil has been photographed many times by visitors from far and wide, I think he is one of those activities himself. I’m no longer surprised when I hear Phil call his name during an outing. A true city dog, he has made many friends. He’s lovable, he’s loving, he’s kind.

Our city also attracts another type of traveler, which Phil has always been intrigued by as well. Seasonal homeless visitors begin to arrive in the spring for the warm months. I think they gravitate here because our city is politically liberal, tolerant, and generous (not to mention lightly policed), and word has spread among the transient community in the region. They come begging at traffic intersections, I agonize over whether or not to give them money out my car window. Would you be helping an addiction or providing a hot meal? I don’t know. Sometimes I give, sometimes I don’t. But my husband and I are constantly contributing to a local organization for the homeless and their pets, a nice and aloof way to ensure my guilt. I guess that marks me as charitably ambivalent. Which my dog ​​definitely isn’t.

Phil knows there is another way to give. Since the beginning of our lives together, when we walk during “homeless season,” he has approached groups of itinerants (who always seem to hang out in packs) to say hello, to satisfy his curiosity about them, to inhale their often nervous smells, to simply connect. Although I felt uncomfortable about the prospect of having to interact with these people, I didn’t want them watching me forcing him away from them; I will always be the product of my southern upbringing, so I have to convince people I don’t like them. the most that I really don’t dislike (don’t ask what it is, because I don’t really know). So I began to anticipate his detours into such a crowd well in advance, discreetly steering him in another direction. His love for the homeless explains my learning to better manage his intractability. And mine.

Last summer, on a Sunday morning when I was not paying attention on a walk with Phil, he sneaked up on two young passersby sitting in a small park near downtown. Too late for a discreet change of course. “Can I pet your dog?” one of the guys called me. “Sure,” I told him as he came towards me. He was skinny, not too dirty, dark-haired, nervous, hyper-alert. We started talking as Phil stopped and took his attention from him. The boy asked me: “Do you live in the city?” I answered yes and then asked if he was too. “No, I’m just a street kid. My mother died and I’ve been living on my own.”

I told him how sorry I was for his loss and asked him how long he had been dead. “About two weeks ago,” she said. “But she wasn’t a very good mother anyway. She was an addict and she eventually got old, so no one could save her.” We kept talking about her stepfather (she didn’t know where her biological father was) and that the boy had gone to her funeral. Finally I asked him if he had a professional to talk to about all this, that I knew of places in the city where I could receive counseling at no cost. She knew about the center for homeless youth, she said, and the people there had been very helpful.

The next morning I called the youth center to volunteer. Something about that boy saying that he was single a street kid I found devastating. That little word revealed his opinion of himself, as if he didn’t count for anything, as if “a street kid” wasn’t human. Surely people just showing up would help convince him, and more like him, otherwise. However, I was told that the center currently did not have a coordinator to train prospective volunteers. I leave my name and number for when the situation changes. But he hasn’t done it yet, obviously.

In the meantime, I’m following Phil’s example. During our most recent visit to a homeless group, my husband was with us. He stood to one side as Phil and I approached the four people. I talked to them, waiting for breakfast at a nearby church, and Phil got an eye-level head massage from one of the two teenagers sitting on some steps below. “He likes to give love,” I told the boy. “Well, I sure do need it,” he replied. We chatted some more, the four of us interested in knowing more about Phil. And they told me about the places in town that served them the most delicious meals, confirming that food is more than nutrition; it is one of life’s pleasures and it should be for them too. In the end, the boy kissed Phil on the top of his head and then let him go. As we walked away, I heard him say to the others, “What a great dog.”

Phil fearlessly makes his way into a community I would be too shy (or anxious) to enter on my own. He gives me the opportunity to be with these people simply as human beings, in a more equal way than a volunteer necessarily relates to a recipient or a benefactor to a beggar. In his own way, he is loyal to them to the core. The very acceptance of him is his charity.

How to take care of your pet dog